If you’re in the startup world you’ll run across the startup curve, rather frequently. The canonical post on the subject was done by Fred Wilson, but the original concept came from a talk given by Paul Graham

It’s not earth shattering, but it does a good job of getting across something that many people, who haven’t been there, don’t realize. Very few successful ventures get to that point without some fluctuations on the way. 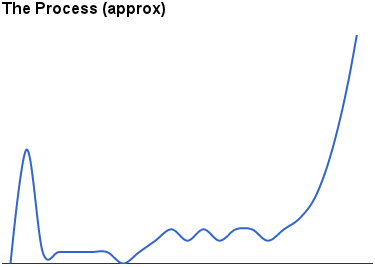 My quick-and-dirty approximation of “the” curve can be found to the right. I haven’t added all of the requisite labels, you can check the canonical post for the details, but the curve itself should get across the basic idea.

There’s the Techcrunch launch, PG’s “Trough of Sorrow” as the startup fumblingly goes from awesome idea to a real functioning, in the broader sense, product. The magnitude could be users, revenue, buzz, it doesn’t really matter, it’s just “success” in whatever form(s) are applicable.

I don’t have anything to add or change, that seems pretty reasonable to me. Those guys have been around a lot more successes than I and are in a much better position to talk about the full life cycle of a successful startup. 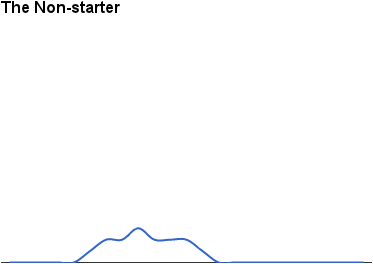 I’m going to talk about other startup curves, the ones that are way more common. After all startups have a ~90% failure rate.

The first is the Non-Starter. It’s the common trajectory for ideas that never get funded. A couple guys and an idea playing around in their spare time. Maybe they get excited as things start to go up and leave their day jobs, maybe they don’t, but either way the initial success is short-lived and there’s bills to pay. Things aren’t going particularly bad, but they’re not growing enough to get VC’s to bite and aren’t having any luck with angels. There are some people using it, but there’s not enough money to cover expenses so after giving it a decent go, the plug is pulled and they move on. No harm, no foul. 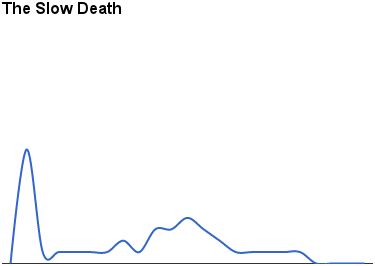 Up second is the slow death. Take a decent idea, add a seed round and go… Venture beat is picking up the launch and the Valley is listening. The first couple days are huge, everyone is on an adrenaline high, but then reality sinks in. All those users weren’t really our target demographic, they’re just techies/valley folks who read Techcrunch. They check it out, tweet about how awesome it is and then never return. 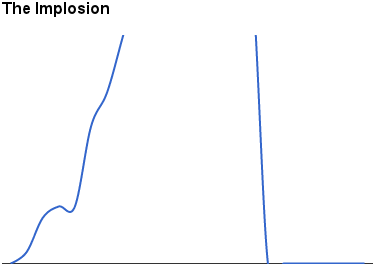 A few weeks pass, no one is showing up now that the buzz has died down. There’s a trickle and enough people around to make things sort of interesting. This is the standard new idea problem. It’s a decent idea, people like it if they see it, but you can’t get in front of (enough of) the right people. The product isn’t viral and it’s good, but not outstanding. There are successes, but big growth is elusive, the money is running low and the VC’s aren’t knocking on the door.

My final curve is a rarity, but it’s worth talking about b/c it’s different. The implosion takes a CEO/E-team with bravado and then some, really it takes a sociopath. Color is the most recent and largest example. The chart could track a lot of things, but revenue isn’t one of them and users probably isn’t either. It doesn’t matter what the product is or how well it work. The CEO has VC’s hanging on every word and writing blank checks. They launch something, there’s enough talk that lots of people are checking it out, maybe even liking what they see. How they going to make money, who cares, “it’s gonna be huge.”

Bully for them, but if they don’t get an exit quickly there’s an apocalyptic event on the horizon. A reality check, the hype bubble bursts. It can happen after the acquisition or before, it’s just a matter of who’s left holding the pieces, the VC’s or the acquiring party.

This post is meant mostly in jest, but the serious point I want to make is that just because you had a big launch and now are going through some “sorrow” it doesn’t mean you’re on track for success, following the startup curve. You may very well be going through the same process, but that doesn’t mean you’re going to see the growth on the other side.