We hate ads. You and I do, but apparently some people don’t or else we couldn’t make any money with their use. When I released Muni Alerts with ad support about 5 months after originally publishing the App I decided to give users the option of turning off ads, as in a check-box in the App’s settings no payment required. It’s worked out just fine and I think more people should do it. 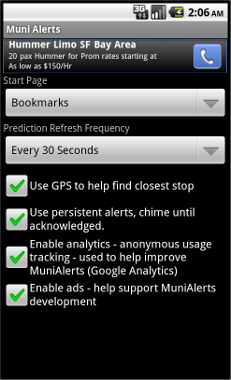 It’s been almost 3 years since I made the first commit on Muni Alerts for Android. It was my first App and it shows, but it serves its purpose and has treated me well. I originally wrote it for my personal use and assumed others would benefit from it as well so I stuck it in the store. Apparently I was correct. With well over 100k installs and near 5-star ratings across its versions for several major transit agencies. It has pretty remarkable penetration given the limited potential market of transit commuters with Android phones in large cities with NextBus support (pdf.)

More importantly it has excellent user engagement. As would be obvious people who frequently take transit will want to know when their bus/train is coming roughly 2 times a day, more days than not in a given month. The roughly 4MM impressions served per month bear this out. As apps go it also has a pretty good ad placement, both in terms of where it lives in the app and what people are doing when they’re looking at it–they’re waiting for the bus and killing time, you can’t get too much better.

All of this is to say that I make a bit of money off of ads in the App, at least considering the circumstances. I’m not going to be retiring off of it’s proceeds anytime soon, but it could make a decent car payment or in my case: pay for my cell phone, buy me lunch when I eat out, and add significantly to the toys fund.

It was when I started to make a custom build for myself without ads that the idea hit me. Why not let people who don’t want to see them turn them off. Chances are they aren’t going to click them anyway. In any case it has turned out that less then 5% of users turn them off (analytics are your friend.)

I have a pro version of the App that has done decently well, but doesn’t bring in as much as the Ads from its free sibling so that’s lead me to rethink things a bit. I haven’t acted on it yet, but I’ve been mulling over making a more universal version of the App that supports multiple backends, not just NextBus. This would allow me to expand the target market quite drastically, but in reality I’d be fighting a lot of earlier entries in other places so I’m not sure I’ll bother. If I end up going this route I’ll forgo the pro version and continue to make ads optional. I’d love to double or triple the $ brought in and I’m more than happy to miss out on a few dollars a month in favor of a better user experience for the users paying enough attention to notice it.